As well as being one of the first Linux distributions you could conceivably install for your Luddite parents without worrying too much, Ubuntu Linux has proved to be a great platform to build other operating systems off.

This is a key strength of free software, and it means that there is a stack of Ubuntu derivatives, including the 'official' ones you can find on the Ubuntu website. There are distributions designed to offer a different user experience, such as the KDE-based Kubuntu, and distros such as Lubuntu and Xubuntu, which offer lightweight desktop systems.

Sabily is an example of the type of Ubuntu-derived operating system that isn't an 'official' member of the Ubuntu family but still uses the Canonical-sponsored OS to deliver a user-friendly experience designed to appeal to a particular community. 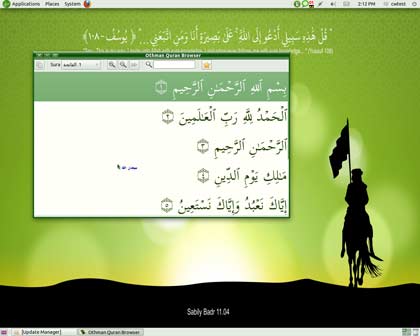 In the case of Sabily, it's a Linux distribution designed for Muslims (it was previously called Ubuntu Muslim Edition). "I launched the Sabily project when I discovered Ubuntu (version 7.04), and found the Ubuntu Christian edition," Sabily administrator Mehdi Magnon told Techworld Australia. "I thought it would be a great idea to provide Muslims with a Linux distribution with many Islamic applications installed, so they don't have to install them manually, as well as a more Islamic look and feel."

The current version of Sabily is based off Ubuntu 11.04 ("Natty Narwhal"), but the team is working on a version based on the more recent 11.10 release ("Oneiric Ocelot"). Naturally the distribution includes Arabic support, although by default the primary language of the OS remains English. Also by default, Sabily offers a classic GNOME desktop, not Unity.

As you would expect from a Natty Narwhal-derived operating system, from an end user perspective installing the system, configuration and conducting basic tasks are all straightforward. In addition, you get the full range of 'classic' software offered by 95 per cent of desktop-focused Linux distros, so word processing, photo manipulation, Web browsing and email are all taken care of. 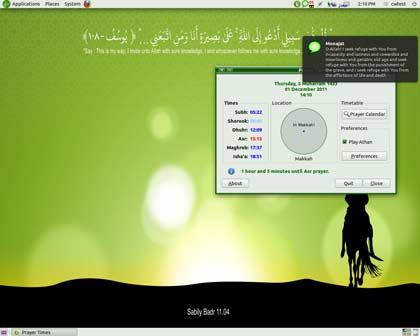 I installed Sabily on a desktop PC without any exotic hardware — a Dell Optiplex GX620 equipped with a 3GHz Pentium 4 CPU and 512MB of RAM that the office's beloved IT guy scrounged from somewhere — but, given its Ubuntu heritage, installation should be pain-free on most computers.

The default Ubuntu theme has been altered, so out of the box the OS includes Islam-themed wallpaper, for example, and a lot of green. There is also a Mecca-themed screensaver. The most significant difference, however, is the series of preinstalled Islamic applications. The two most obvious of these on start-up are Monajat, which displays on-screen Islamic prayers at user-configurable intervals, and a prayer calendar that resides in the menu bar at the top of the screen.

Other software includes a range of religious study tools and other Islamic software such as Noor (a Koran viewer), Othman Quan Browser, Thawab (an Islamic encyclopaedia), Zekr, a relatively complicated multilingual Koran study tool that includes audio (unfortunately I encountered a number of crashes when attempting to use it) and Sabily Zakat, a calculator for helping with Zakat, the Islamic system of alms. Another application is the Nanny parental control application that can determine times when the internet and PC are accessible, as well as blacklist and whitelist websites.

The applications vary in quality (like most open source software does), but this probably says more about the current state of the software than the efforts of the Sabily team when it comes to putting together this distribution.

According to Magnon, the Sabily team is looking at developing new Islamic software, "like an application of Hadiths (sayings of the Prophet Muhammad, peace be upon him) or an application to learn Arabic". 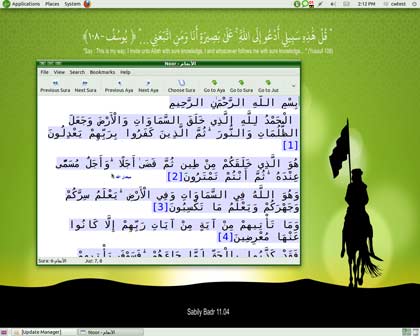 Sabily has had most take up in Indonesia, Magnon says, where the OS has particularly been spread by university students. The distro averages about 20,000 downloads for each release, excluding those downloaded using torrents or mirror sites. The team has close to 300 'members', but there are only a dozen or so who are "very active", Magnon says. The project also has a Facebook group with more than 4000 members.

Overall the Sabily project has had a light touch when it comes to customising mainstream Ubuntu Linux. Some of the software is a little rough around the edges (the fact that I am unfamiliar with Arabic really didn't help me while using the system, given some applications don't have English interfaces, but that's my monolingual* burden to bear).

Of course, it's perfectly possible for someone interested in Islam to customise a regular version of Ubuntu and install the individual packages included with Sabily. However, a distro like Sabily can make life easier (certainly if you're configuring multiple machines or if you're a novice), plus it's an easy introduction to the world of Islamic open source (and probably strengthens the efforts of developers in this area just through its very existence).

*I speak a smattering of Java and Python, I guess.